Next Offering: Dates to be announced.

Geomagnetic disturbances (GMDs), caused by solar coronal mass ejections, have the potential to significantly impact the operation of the high voltage electric grid by causing geomagnetically induced currents (GICs).  Over the last decade there has been significant research, industry interest, and regulatory concern about the impact of GMDs on the high voltage electric grid.  The purpose of this two-day short course is to put the GMD issue into proper perspective by providing a comprehensive coverage of what is currently known about the impact of GMDs on the grid, the tools being used for their assessment in planning and operations, and the current areas of research.

The course philosophy is to provide in-depth coverage of the topics, but to do so using a practical, hands-on approach.   For example, the course provides a detailed consideration of what is needed to do the GMD assessments required for NERC TPL-007-1, and also contains an interactive, real-time simulation of the operational impacts of GMDs on the grid.  Throughout the course concepts will be illustrated using common industrial tools including those from EPRI and PowerWorld Simulator.  Collectively the four course instructors have wide experience in this area doing electric power system studies, software tool development, research and engineering education (Hours: CEU 1.8, PDH 18).

The course is designed to provide a comprehensive coverage of the impacts of GMDs on high voltage electric grids.  It is ideally suited for electrical engineers who work in the areas associated with either electric grid planning or operations, and for new graduates who would like to rapidly gain experience in the area of GMD grid impacts.   The course will also be useful for technical staff in regulatory agencies, for technical managers, for academics wishing to gain practical knowledge in this important area, and for graduate students interested in careers in the power industry. Bob Arritt is a Technical Executive at the Electric Power Research Institute (EPRI). He received a BS, magnum cum laude, in electrical engineering from West Virginia Institute of Technology in Montgomery, West Virginia. He received a MS degree in electrical engineering from Worcester Polytechnic Institute in Worcester, Massachusetts. His current research activities include leading the geomagnetic disturbance work, distributed resources, system transients, harmonics and protection. Mr. Arritt joined EPRI in 2007. Prior to joining EPRI, Mr. Arritt worked for Raytheon in Sudbury, MA where he worked in the Power and Electronic Systems Department. At Raytheon he was awarded the 2006 Raytheon Technical Honors Award for Peer and Leadership Recognition for Outstanding Individual Technical Contribution and also received a 2005 Raytheon Author’s Award for design of a Phase-Shifted Transformer for Harmonic Reduction. Since at EPRI, Bob has been awarded the Chauncey Award for his outstanding innovative and achievements in science and technology. Mr. Arritt holds a US Patent as the lead inventor for “Method for Detecting an Open-Phase Condition of a Transformer,” has authored several technical paper, is an IEEE Senior member, and Professional Engineer licensed in the State of Tennessee. Jenn L. Gannon is with Computational Physics, Inc (CPI), serving as their Geomagnetic Disturbance Division Lead in CPI’s Boulder office. Jenn received her B.S. from the University of Virginia in 2000 and her Ph.D. from the University of Colorado in 2005. For research she has been studying charged particles and electromagnetic phenomena in near-earth space and the solid earth throughout her scientific career. Previous to joining CPI, Jenn served as a scientist at the NOAA Space Environment Center and its successor agency, the NOAA Space Weather Prediction Center, and later as a Federal researcher at the U.S. Geological Survey. Moving to the private sector, Jenn co-founded Space Hazards Applications, LLC, of Boulder, Colorado, a consulting firm for space hazards to built infrastructure. Jenn is the author or co-author of many publications in the peer-reviewed literature, as well as several U.S.G.S. Open-file Reports and conference presentations. 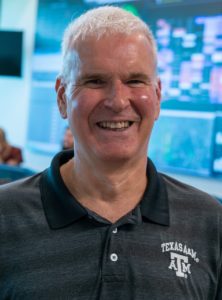 Tom Overbye is a TEES Eminent Professor in the Department of Electrical and Computer Engineering at Texas A&M University (TAMU). He received his BS, MS, and Ph.D. degrees in Electrical Engineering from the University of Wisconsin-Madison. Before starting his academic career he was employed with Madison Gas and Electric Company, working in their planning and operations departments. He is the original developer of PowerWorld Simulator (a widely used power system planning tool), a co-founder of PowerWorld Corporation, and an author of a widely used Power System Analysis and Design book. He is a recipient of the IEEE Power and Energy Society Outstanding Power Engineering Educator Award, an EEE Fellow, and a member of the US National Academy of Engineering. Tom is a leading researcher in the electric grid impacts of geomagnetic disturbances (GMDs) and was also responsible for the integration of GMD analysis into PowerWorld Simulator. Komal Shetye is an Associate Research Engineering in the Department of Electrical and Computer Engineering at Texas A&M University (TAMU).  She received her B. Tech. degree from the University of Mumbai, Mumbai, India, and a M.S. degree in electrical engineering from the University of Illinois at Urbana-Champaign (UIUC).  Prior to joining TAMU she was a Senior Research Engineer with the Information Trust Institute at UIUC.  Komal has been extremely involved in the area of GMD impacts on the electric grid both from doing numerous studies for electric utilities and in doing research. Tracy Rolstad is the Technical Director for Power Systems Consulting (North America). PSC is a global company that provides specialized consulting services to the energy industry.  He received his BSEE from the University of Idaho and a graduate diploma from the Naval War College (College of Naval Command and Staff).  He started his career in power systems as a Reactor Operator and Engineering Watch Supervisor in the United States Navy (onboard USS Hawkbill) serving 22 years in the Navy and Navy Reserve.  His experience in power system planning and modeling began at the Joint Warfare Analysis Center and then developed and evolved at the Bonneville Power Administration (technical operations), as a Principal Engineer at Utility System Efficiencies, and as a Consulting Engineer at Avista Utilities.  Tracy serves as the Data Subcommittee Chair at the Western Electricity Coordinating Council (WECC). He previously served as the WECC Technical Studies Subcommittee Chair, Vice-Chair, and Secretary.  Additionally, he served as the WECC RAS and Relay Workgroup Chair addressing modeling issues related to 2011 AZ to CA outage.  He is a member of the IEEE and the VFW.

Air Transportation:
Direct flights available at the Texas A&M Easterwood Airport (CLL) from Dallas-Fort Worth (DFW) on American and Houston (IAH) on United.
Other airports within driving distance: Austin (AUS) and Houston (IAH), both about two hours away
May rent car or use shuttle service: Airport Ground Shuttle